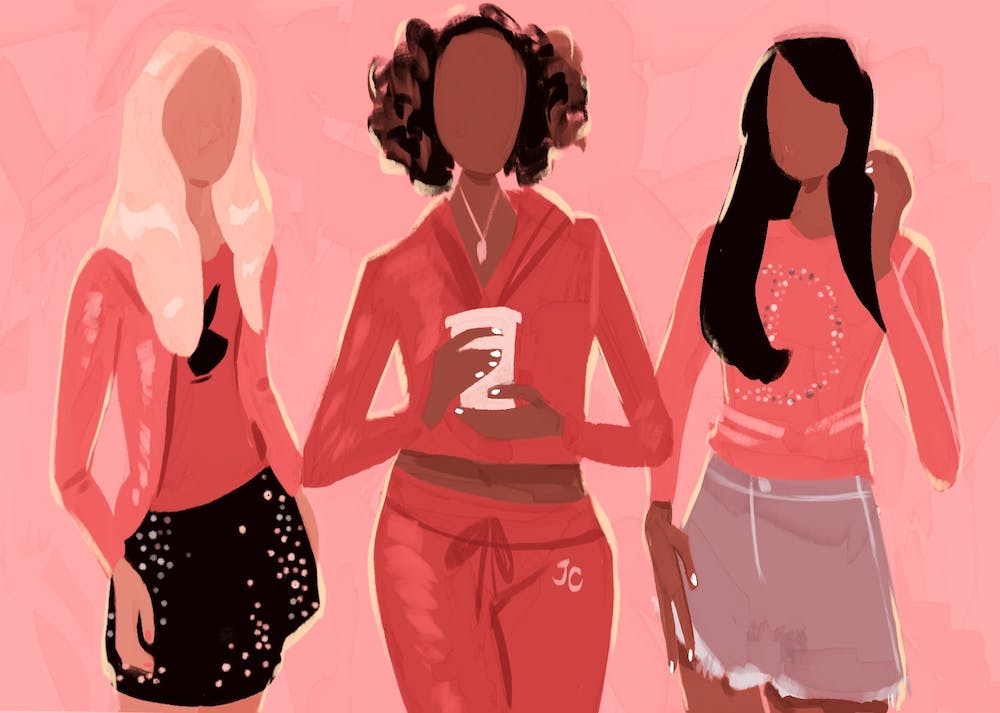 “Just like economic recessions, the fashions of decades past often repeat themselves.” Illustration published on Tuesday, Oct. 27, 2020.

As predicted by the 20-year rule, early 2000s fashion is making a major comeback. While I can’t imagine dresses over jeans or platform flip flops taking over our wardrobes again, many salvageable trends will definitely make a bold reappearance.

The early 2000s was a time period defined by rebellion. Young designers toppled the traditional fashion ideals by bringing youth culture and streetwear to the runway. Out with the old, in with the new — both in morals and fashion. Here are the trends I’m expecting to make a comeback in the coming decade:

The “shameless lingerie display” trend can be traced back to the performance costumes of 1930s burlesque dancers.It hit the runway in Jean Paul Gaultier’s Spring/Summer 1997 collection and during the late ’90s when a young Tom Ford helmed Gucci. The pop cultural importance of the noticeable thong, however, was solidified in R&B artist Sisqó’s “Thong Song” which peaked at No. 3 on the Billboard Hot 100 Chart and was nominated for four Grammy awards.

While the original 2000s trend of peeking underwear as an accessory might be a little cringy to those who actually remember it, we’ve been seeing a modified version of it on runways and celebrity looks for a couple years now. Cutouts reminiscent of the exposed thong look draw from the peeking sides instead of the back can be found in Normani’s outfit in the “Motivation” music video or Kendall Jenner’s pink two-piece outfit at a New York Fashion Week after party.

Bring this trend to your wardrobe with these looks:

Almost all our clothes came bedazzled in the 2000s. Bedazzled phones, rhinestoned denim, sequined dresses— you name it, it would have gems on it. I’m expecting subtler touches of the classic Y2K rhinestones on jeans, jackets or t-shirts. Sequins have also made a comeback on formal wear and red carpets. Think those strappy sequin dresses everyone was wearing out, back when it was okay to leave your house (how I miss those days).

This trend was innovated and shaped by Black culture and streetwear. American fashion designer Dapper Dan created “Knock-Up” clothing which featured old-money status symbols and logos from high-end European fashion houses such as Louis Vuitton, Fendi and Gucci. These custom designs revamped the image of these older brands while also creating unique looks for Harlem’s biggest rappers. Most of those brands’ audiences were  wealthy whites, but Dapper Dan made them more accessible and attainable for BIPOC communities. In the late 90s to the early 2000s, popular luxury brands like Tommy Hilfiger, Christian Dior and Moschino adopted his style and created clothing with their logos boldly plastered all over.

This conspicuous consumption trend soon died off by the early 2010s following the recession, as this obvious display of your money and status was considered flashy. High-end brand popularity decreased, and consumers turned to fast fashion, which is losing popularity now in the face of the sustainable fashion movement. Monogrammed clothing is back on the runway and in celebrity streetwear, on the likes of Billie Eilish, Rihanna and influencer Nava Rose.

I know what you’re thinking. Forget those dreadful high-low dresses from middle school formal, that’s not what we’re talking about here. This Y2K trend was all about side-to-side asymmetry: uneven strap widths or one-shoulder tops, asymmetrical side hemlines on dresses and wrap skirts with slits. This trend has been adopted by a few Instagram influencers and has found its home in a few Spring/Summer collections.

The animal print trend is one of the most predictable trends — it goes in and out of style in a cycle, so if you have something animal print, hide it in the back of your closet and the style will come back within a decade. Animal furs have been used as clothing since the dawn of human beings, but the 1930s dawned a new era of animal patterns in fashion, from fur coats to fur swimsuits. As it moved through the decades, animal print fluctuated from subtle and chic to big, bright and bold. In the early 2000s, animal print became a popular pattern for products for children and teens like The Cheetah Girls or Lisa Frank. It regained popularity in the 2000s after “Sex and the City” featured some animal prints.